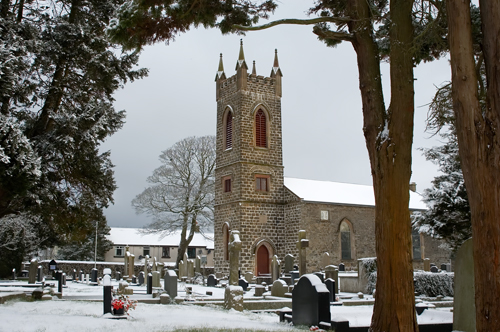 The parish church of Dunluce, St John the Baptist, stands on the ancient ecclesiastical site of Portcamman first recorded in 1262. The ‘Ecclesiastical Roll of 1306 describes the parish as distinct and separate from the parish of Dunluce and the more important of the two. However, under the influence of the MacDonnells, St Cuthbert’s church at Dunluce Castle became more prominent, by the time of the Regal Visitation of 1633 both parishes had grown into a union titled “Portcamman cum Dunluce” and served by one vicar.  The ancient parish title of Portcamman with its church building dedicated to St John the Baptist, links the site not only with the Norman period but also with the Knights of St John of Jerusalem and the Crusades. The church and quarter lands were a gift under the patronage of the Prior of the Order of St John of Jerusalem, sometimes called Knights Hospitallers, whose patron saint is St John the Baptist.

In 1622 both churches are described as ‘ruyness’ however, as a result of repairs carried out to St Cuthbert’s by the Duchess of Buckingham, wife of Randal, 2nd Earl and 1st Marquis of Antrim, St Cuthbert’s (Dunluce Castle) was in all probability the only place of worship from 1633 – 1820. At a Vestry meeting held on the 19th October of 1820 it was determined that due to the expense of carrying out repairs to St Cuthbert’s and its inconvenient location, they decided to build a new church on the ruins of the old church at Portcamman titled St John the Baptist, Parish of Dunluce. 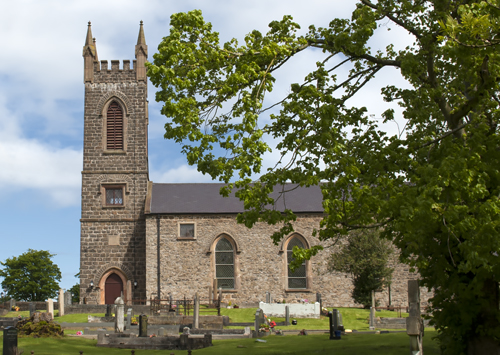 On the fan light above the door to the nave is the eight pointed cross of St John the Baptist, a reminder of the eight obligations of the Knights Hospitallers. From Ecclesiastical Antiquities of Down and  Connor (1847) we quote, “ Ecclesia De Portcamman, it hath a townland of St John’s whereupon the church standeth, and one quarter in Glebe.

In old time the Prior of St John had the presentation”. The prior of St John was the Commander in Ulster of the Order of the Knights of St John of Jerusalem founded to protect pilgrims travelling to the Holy Land. Grants of land were made to the Order and it would appear that they owned a townland in the parish of Portcamman on which this church stands. This explains its dedication to John the Baptist, patron saint of the Knights of St of John.

(1). The colours of the Knights of St John the Baptist, white on a black background, remind one of his baptism for repentance of sins which takes us to the font (2) Here, we have the colours of black and white forming the eight pointed star, symbolizing regeneration, namely our rebirth and new life in Christ through holy baptism. The white and black linking the eight points of the star, symbolize the spread of this new life to all the corners of the world. This ‘star’ symbol can also be seen in the tiles that border the aisle carpet. On the tiles in the Chancel (3) and Sanctuary (4) we have the doctrine of the Trinity represented in the relief of the Cross with its fleurettes and shamrocks and round dots symbolizing the sun. Pulpit (5).  Erected in October 1875 in memory of Alexander Montgomery by his niece, Barbara A. Montgomery. Prayer Desk (6) Lectern (7)  In the shape of an eagle, with the Bible resting on its wings. Because, it is thought, that the eagle can look unflinchingly into the heart of the sun so too, the words of Holy Scripture are an unflinching revelation of God. The North Transept was added in 1897. (8) At the altar (9), on the frontal and half antependium (St Margaret fabric) we see the Trinity presented in the threefold crosses and the Rose which reminds us of the love that transcends death. The candles on the altar represent the Word of God: the candle on the south end represents His Word in the Epistles and on the North end the candle represents God’s word in the four gospels. The East window (10) is in memory of Sir Edward Charles Macnaghten MP for Co. Antrim who died 6th January 1876. The chancel and sanctuary were added in 1874. The Oak Reredos (11) in the chancel was installed in September 1897 by parishioners of Dunluce in memory of the Most Reverend Edward White Benson, Arch¬bishop of Canterbury, who celebrated the Holy Communion in this church on 4th October, 1896, The following Sunday, whilst attending Morning Service in Hawarden parish church with William Gladstone (Prime Minister), he passed into his rest as the words of the General Confession were being prayed. Absentes Adsunt  (12) ‘Absent though present’ – a reminder that loved ones departed in Christ though physically absent are with us in the fellowship of the risen Christ.

Photo below shows the view to St. John the Baptist prior to the new houses being built during the 1960s. The church gate is at the end of the terrace on the left. 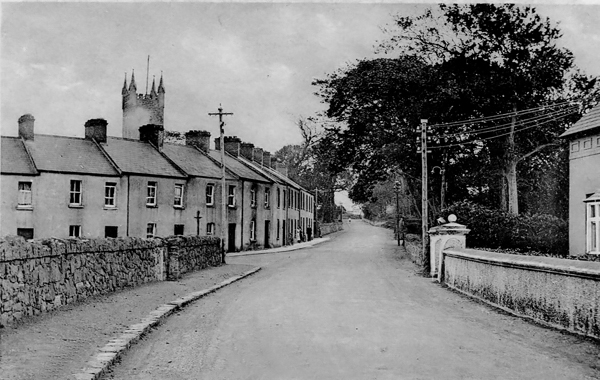 The Church of Ireland is that part of the Irish Church which was influenced by the Reformation and has its origins in the early Celtic Church of St Patrick.  It is both Catholic and Protestant because it is in possession of a continuous tradition of faith and practice based on scripture and early church traditions, enshrined in the Catholic Creeds together with the sacraments and apostolic ministry. It is Reformed or Protestant because it affirms a constant witness against innovations in doctrine and worship that were not in the teaching and practice of the Primitive Faith. Like other Anglican/Episcopal churches, it is a self-governing part of the Anglican Communion which means that it is in union with the See of Canterbury but under the leadership of the Primate of all Ireland and Archbishop of Armagh. The General Synod is the supreme legislative authority and consists of two houses: the House of Bishops, and the House of Representatives. In 1871 the Church of Ireland was disestablished.