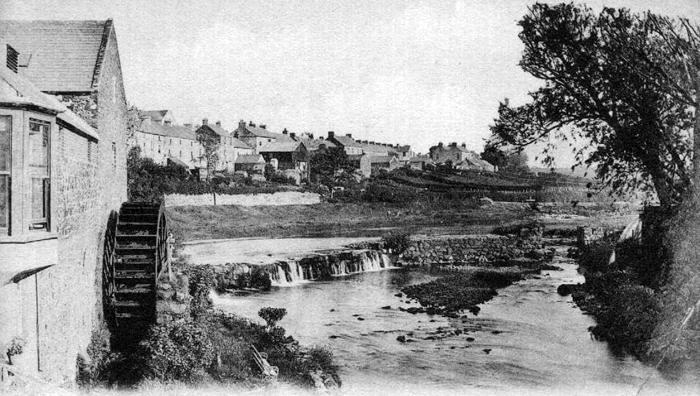 The  small stream which you are standing near is known locally as St.Columbs Rill, it was named after St.Columbcille (also known as St. Columba) who originated from Gartan in Donegal and founded the important Christian Abbey on Iona. He was one of the leading Christians who followed in the footsteps of St. Patrick.

The stream was originally known as the 'Meadow Burn' and flowed from the high ground beyond Bushmills down through the Distillery grounds where the water was used in the production of Old Bushmills Whiskey. It then flowed through the meadow before joining the river Bush here.

We know from records that St Columbcille is reputed to have blessed many rivers and streams throughout Ireland and that these 'blessed' streams produce the sweetest water in the land. This intriguing fact led to the re-naming of  our own  'Meadow Burn'  in Bushmills to  'St. Columbs Rill' in the late 18th century.

As the water from a stream was being used in the production of Bushmills Whiskey someone came up with a brilliant marketing idea which would not only capture a popular legend of Ireland but also link it to a saint and a bottle of whiskey. This idea resulted in the 'Meadow Burn' becoming one of  scores of streams and rivers blessed by  St. Columbcille and the  'sweetest and smoothest water in Ireland' that it became was used to produce Bushmills Whiskey?.

From then on the stream was known and pointed out to  visitors  as 'St. Columbs Rill'.