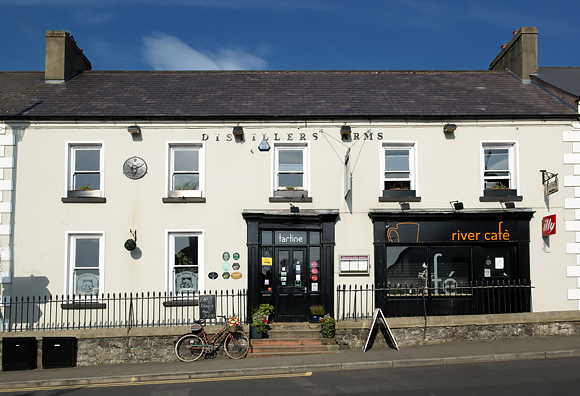 The Distiller's Arms was built in the late 18th century and home to Hugh Anderson and family. The family name is carried in the adjacent local  townland  of  Clogher Anderson. Hugh  Anderson formed the Bushmills Whiskey Company and was the first registered owner in 1784, at the time there were five other stills operating locally, mostly illegal.

The original license to distil was granted in 1608 to Thomas Phillips by King James 1st of England and it is this license which is attached to the Bushmills Distillery.

The Distillery at this time was no more than a cottage industry which was part of the surrounding land that Hugh Anderson developed and farmed. A notable development by Hugh Anderson was the building of what was known at the time as a 'model farm'.  Although hidden from view the centrepiece of this Georgian farm including the farmyard lie hidden from view and in ownership of the Bushmills Distillery  who acquired it in 2016. At the rear of the Distiller's Arms and to the right you will see an old store building with a bell tower (minus bell) which would have been  part of the farm, the bell would be rung to bring workers in from the fields for their meals.

The concept of 'model farms' were at the forefront of the agricultural revolution during the 18th century, a period known as the 'Age of Improvement'. A model  farm researched and demonstrated improvements in agricultural techniques in breeding, growing, efficiency, and layout. Education and commitment to improving welfare standards of workers were also an aspect of the ideal farm movement. Farm buildings were designed to be beautiful as well as utilitarian and inspired by the ideals of the enlightenment.

The example of architecture in the Georgian farm that the Hugh Anderson's built is exemplary and includes pigsties constructed out of cut, dressed basalt with round roofs, a cobble courtyard and an impressive rampart  gate entrance out to the fields. One of the jewels in the architecture integrity of the village which hopefully one day will be realised, preserved and open for the general public to enjoy.....I hope someone from  Jose Cuervo  (Beckmann family of Mexico) who own the Distillery will hear this. 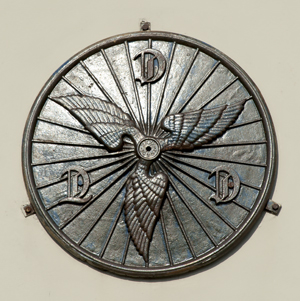 If you look on the wall between the top two upper room windows you will see the cast iron plaque of a bicycle wheel. This is the emblem for the  Cyclists’ Touring Club and a reminder of the impact that bicycles had on tourism in the late19th century when cycling opened up a whole new world of travelling for people who could not afford the huge cost of keeping a horse and carriage.  The Cyclist Touring Club was founded in 1878 and introduced these big cast iron signs on cycle-friendly inns and hotels from 1884.  In Bushmills we have two of these signs, the other being on the Bushmills Inn, the club is still running today.