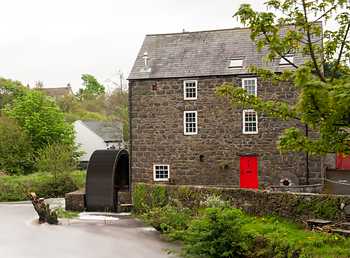 Formerly and locally known as  Curry’s Mill after a former owner James Curry.  The mill is believed to date from circa 1816 and consists of two buildings, a three storey random rubble Mill building and a two storey double Kiln Building with a red brick lean-to at the northern end. The Corn Mill remained in operation until the early 1950s and in the 1990s was converted to a private residence. In 2012, with assistance from the Bushmills Townscape Heritage Initiative, the Kiln was also converted to residential use and the Mill Wheel re-built.

An Ordinance Survey map of 1832 shows two buildings, one being the existing Kiln building and the other being a building on the site of the main Mill itself.  As the Ordinance Survey map of 1857 has a different configuration the original Mill, which was running parallel to the kiln and not at 90 degrees as it is now, it must have been replaced before 1857.  Though the Kiln appears to be the same on both the 1832 and 1857 Ordinance Survey maps the stonework variation between both ends would suggest that both parts were built at different times. 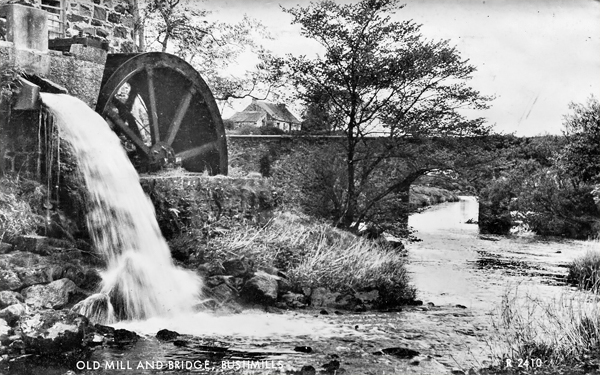 The kilns were located on the ground floor with red brick furnaces. There was a very steep single open staircase to the first floor where there was an external door to take the grain. The grain would have been spread out on perforated iron square plates, the perforated holes allowing the heat from the furnaces in the two kiln rooms below to permeate through. When dry, the grain was shovelled into rectangular wooden shutes for collection in sacks below.

The red brick lean-to was a later addition and does not appear on the 1902 Ordinance Survey map. It was used as the Mill Office and had its own fire and chimney stack in the corner.  Behind the kiln building is the Salmon Fishery which was the site of a Scutching  Mill (Flax) that was operating at the same time, part of this old mill now forms the main central block of the fishery building. 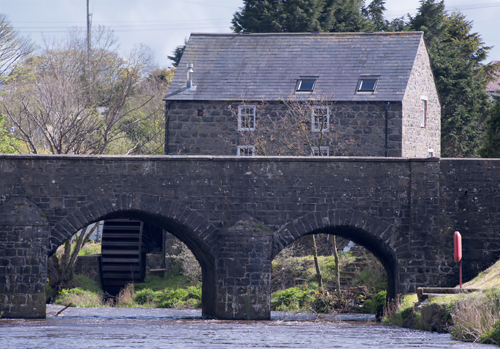