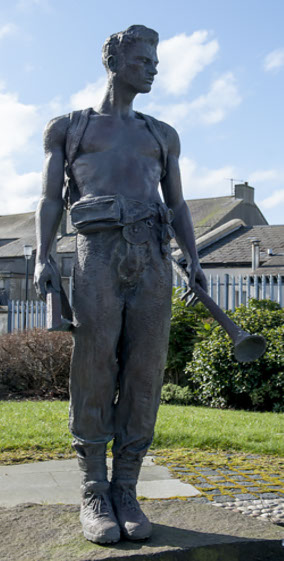 The 'Alphabet Angel' is a unique piece of community artwork which was unveiled in the Dundarave Housing Estate in December, 2004.

It was created by the artist Ross Wilson who worked with children from Bushmills Primary School and young people from  Dundarave Estate through a series of creative art workshops. The sculpture explores and celebrates the local tongue of Ulster/Scots or Scots/Irish.

This was a project that lifted an everyday tongue which was perceived by many as being 'not proper' English, to its rightful place at the heart of a community.  At the time of its installation it was the only known bronze artwork in the world to mark this unique local tongue.  At the time there was pressure from one funder to place the sculpture on the main street, this was strongly resisted by the community and after two appeals the funder finally relinquished and the sculpture was placed where it belongs, in the heart of the community that created it.  A community that learnt through the project the value and uniqueness of their spoken words.

It was place on a raised mound in the corner of an open space facing the homes in Dundarave, this was long before tourism had started to grow in the village. Today it has become a feature on the village heritage walk and a new  path has been installed to the rear of the sculpture to facilitate visitors with rest benches for local residents.

The 'Alphabet Angel'  figure is in the form of a traveller with several symbolic items being carried in the hand and  on the body which represent the following:

A backpack with Hearts: contains the forgotten words, phrases, meanings, the redemption of language and the reality of dreams being carried forward between the twinned hearts of Ulster-Scots.

Heart 1: represents the heart of the land, the soul of the place.

Heart 2: represents the heart of the people, the spirit of the language.

Flying Goggles: represents the protection of sight and vision through the alphabet journey of dialect.

A Belt Pouch: contains the renewed contemporary currency of an ancient spoken tongue.

Capital A : represents the Alpha, beginning of communication and the origin of word making, both spiritual and oral.

Trumpet: heralds the call for recognition and awareness of the unique sound and rhythm of the Ulster Scots tongue.

The tongue is a shared form of communication common in North Antrim, Donegal and the Ards Peninsula which crosses traditions and symbolises the close ties between Ulster and Scotland which at its closest distance is only 12 miles away.